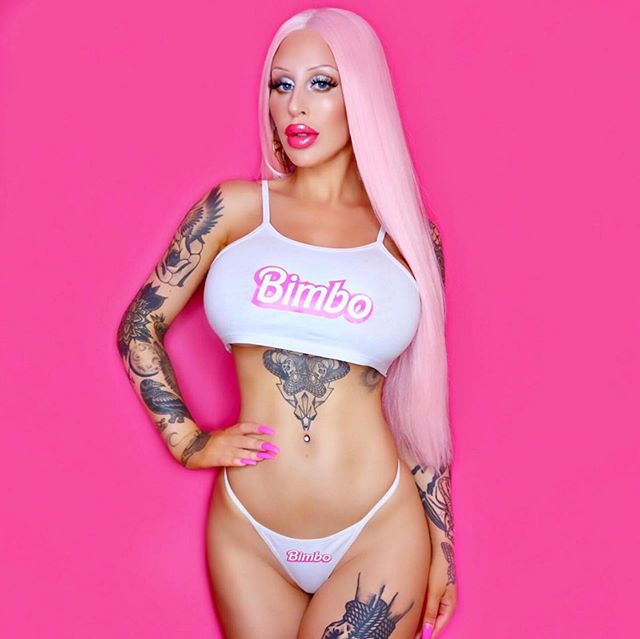 Alicia Amira is a 29 years old, self-proclaimed professional bimbo Girl. She was born and raised in North Zealand, Denmark. Now she is living in England And she is a professional bimbo doll. She uses her body to look like a sex doll.

Alicia Amira has to fuck doll tattooed under her bum. It’s up post to be reality painful, but it will be worth it.

She has to have fucked all tattooed onto her bum. It’s supposed to be really painful but she thinks it would be worth it for her. She is a big digger bum and her Wider hips to get that extreme hourglass figure.

Alicia Amira is a woman, who is on a mission to reclaim the word – ‘bimbo’ and destroy the stigma surrounding female sexuality. She is a girl power activist and she said that A bimbo is like stupid, stupidity, being a bimbo is empowering because you are fighting back to the system that has been demoting come and they motivate and sanctioning woman’s life like me so far long time.

Alicia wants to change the rumour around sexuality and particular city, and should support women who are working in the sex industry.Alicia was involved in the sex industry when she was 26, recently barcroft TV Followed Alicia to Los Angeles to meet the woman who are the part of her bimbo family.

Alicia meet angel, Rachel, Jasmine and Alex and took part into the photo shoot for the “Be A Bimbo“ clothing line. The girls were inspired by the message she was sending out to the World they discuss judgement they face on a daily basis and importance of inclusively When it comes to female sexuality.