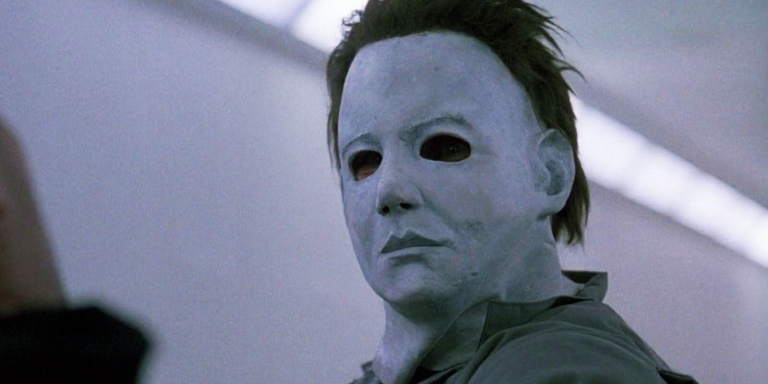 Horror games are pretty enjoyable. Many people enjoy a good scare, from classic zombie games such as the Left 4 Dead and Resident Evil franchises to the jumpscare-filled Five Nights at Freddy’s and Slender. But if you want a game that you can play with your friends, try playing Behaviour Interactive Inc.’s Dead by Daylight.

Its premise involves four survivors trying to get out of the realm of a hostile being known as The Entity. The Entity tries to stop you from getting out by summoning a variety of violent killers. Some examples include The Trapper, The Nurse, The Legion, The Oni, and many more.

Released in 2016, Dead by Daylight is one of the best cross platform games available on Switch, Xbox One, PS4, and PC. Not to mention, the game also features several names from other horror franchises. Here are four playable horror icons in Dead by Daylight.

1. The Shape – Michael Myers From Halloween

Let us start the list with a name that most horror fans associate with slasher films. Wearing a menacing white mask and carrying a kitchen knife is the silent and terrifying Michael Myers from the 1978 independent horror film Halloween by John Carpenter. Myers was released in the game on October 25, 2016, with the release of the Halloween Chapter.

And like his film counterpart, Myers relies on stalking his victims. This mechanic allows his unique power, Evil Within, to increase effectiveness. At the start of the game, Myers is a relatively slow character. But as you continue to stalk your victims, he will eventually gain speed, allowing him to chase other players effortlessly.

He can even one-shot other players within a minute of the temporary max level of his unique power. Keep your targets in your sights to build up Evil Within, and you will be just as menacing as this slasher icon in the game.

2. The Cannibal – Leatherface From The Texas Chainsaw Massacre

From one of the most iconic horror film series, Leatherface Sawyer, or Leatherface, became a part of the game’s killer roster on September 14, 2017. The game introduced this slasher icon in the LEATHERFACE™ DLC. Although there is another sledgehammer and chainsaw-wielding killer in the game, called The Hillbilly, there are still differences in their respective playstyle.

Unlike the Hillbilly that wildly charges forward, Leatherface does broad conal sweeps while moving slightly faster. This mechanic lets you control him relatively more effortlessly if you want to hit your victim with a chainsaw. Leatherface starts with three charges of this move.

But if he strikes an object, runs out of charges, or revs his chainsaw for too long, he will be rooted in place as the chainsaw flails uncontrollably. If you combined aggression plus control on his mechanic, Leatherface could be an unstoppable killer.

3. The Nightmare – Freddy Krueger From A Nightmare On Elm Street

Nice hat? Check. Christmas sweater? Check. Gloves with gardening shears? Triple check. You know who it is: the dream demon, Freddy Krueger from Wes Craven’s 1984 classic slasher film. On October 26, 2017, this character was added as part of A Nightmare on Elm Street Chapter. And like in the movie franchise, Krueger relies on his victim’s sleep to terrorize them.

Survivors start the game in an awakened state. Within a minute of the game or if Krueger hits them, survivors will gradually fall asleep. This scenario is where Krueger comes in, as he is only visible within a certain distance if the survivors are awake. Krueger has two powers: Dream Snare and Dream Projection.

Dream Snare lets Krueger leave a snare trap on the ground that can temporarily slow down or make a survivor scream when they cross it. Meanwhile, Dream Projection allows Krueger to teleport to a generator on a long cooldown. Get a feel of his rather unusual mechanics, and you will be a nightmare in the game.

Dead by Daylight also features malevolent characters from other horror games. One of them is the hulking terror from Silent Hill, Pyramid Head. Aside from his trademark triangular helmet, he drags his great trusty knife. And as with the other killers from the game, this menacing brute has his unique playstyle. As part of the Silent Hill chapter, Pyramid Head became a part of the roster on June 16, 2020.

Pyramid Head’s power, Rites of Judgement, allows him to stab his great knife to the ground, making fissures as he passes by. Survivors who walked on these fissures are revealed to Pyramid Head while receiving the Tormented status. Additionally, players who are downed with this status are instantly sent to a unique Cage of Atonement that also functions as hooks.

Pyramid Head can also use a fast-traveling ranged attack, Punishment of the Damned, while Rites of Judgement is active. And lastly, if a victim is on their last hook and is afflicted with the Tormented status, Pyramid Head can execute Final Judgement, an instant-kill move. Know his playstyle well, and you will be executing survivors in no time.

As one of the best cross-platform games today, it is no surprise that Dead by Daylight keeps on releasing more survivors and killers in the game. Overall, the four characters above are a few of the many horror icons who made their appearance.

Other names include Ghost Face, Nemesis, Pinhead, Sadako, and even the Demogorgon from Stranger Things. For more gaming information, visit CellularNews.com!