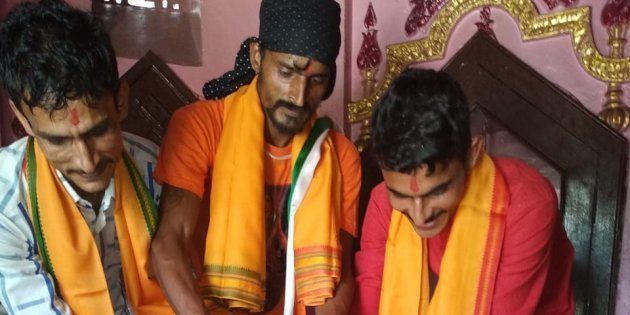 Haryana Hisar district: According to the report of TOI, more than 250 members of near about 40+ Muslim families in Haryana, Hisar districts- Bidhmira village Embraced Hinduism on 8-5- 2020 (Friday).

And much more thing is that 80+ old lady last rites performed according to Hindu customs.

Haryana’s Jind distric: This thing not only Happened on The with Meera village but also near about 40 members of six families of the Danoda Kalan village also embraced Hinduism last Friday. Read More…

The question is why this family is converting into Hindus? Is there any political pressure? Or do they want to change their religion?

There are exactly no details why they did this. Some people think that the move comes as of violence against Muslims has increased the state in the last few weeks during the lockdown period.

Satvir – “A new converted Muslim Satvir claimed that he has heard of his Hindu ancestors embracing Muslim under pressure during theTime of Mughal ruler Aurangzeb.”

One thing is that in 2015, 100 Dalit families of same Hisar village convert to Islam –

World War 3: Is World War 3 occurring? Has WW3 Been Pronounced?
Most Asked Questions After Tik Tok Banned In India
Movies Suspended Due To Coronavirus: "Be Responsible, Stay Safe"
2024 Presidential Odds At Betfair For Obama Vs Hillary
Ivanka Trump's Memes In India Shared By Ivanka Himself
Deal With India, Melania's Official School Visit, Know President Trump...
Bollywood Star Irrfan Khan Passes Away At Age Of 53
The Story Of China And Muslim Uighurs
Tobacco And Smoking Materials Price Increase In India
When Craigslist Shut Down Its Personals Section - What We Lost
Youtube Vs TikTok: Full Coverage On Dispute
Bollywood Star Rishi Kapoor Passes Away At 67 In Mumbai Hospital
Spread the love
0 0 votes
Article Rating
Subscribe
Login
0 Comments
Inline Feedbacks
View all comments